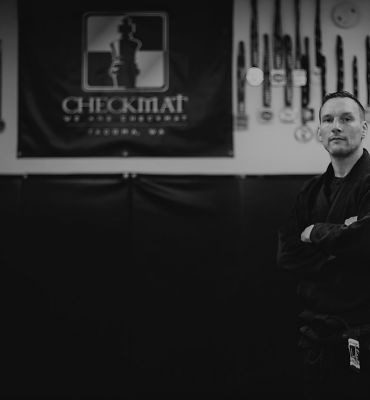 Professor Jimmy Thompson began his journey into Jiu Jitsu in 1997 at the Seattle School of Brazilian Jiu Jitsu while attending The University of Washington. He successfully competed in Brazilian Jiu Jitsu tournaments throughout the late 90’s and early 2000’s as a white belt and blue belt. In 1998, he entered into the arena of MMA but in 2006, due to injuries, he exited sport. He has a professional record of 6 – 2.

Upon retirement he founded Tacoma Mixed Martial Arts  (aka. T – Town MMA / Checkmat Tacoma) in Tacoma, WA, which currently has the longest running Brazilian Jiu Jitsu program in Tacoma, WA (12+ years and running). In 2017, he returned to the competition mats as a Black Belt. He currently oversees 2 other BJJ programs that include Gig Harbor MMA and our community project at Quincy BJJ –  collectively known as the Narrows Fight Team, a division of Checkmat Jiu Jitsu.

Thanks for contacting us!

We will be in touch shortly.
If you contacted us outside of business hours it might take us a bit longer to respond.